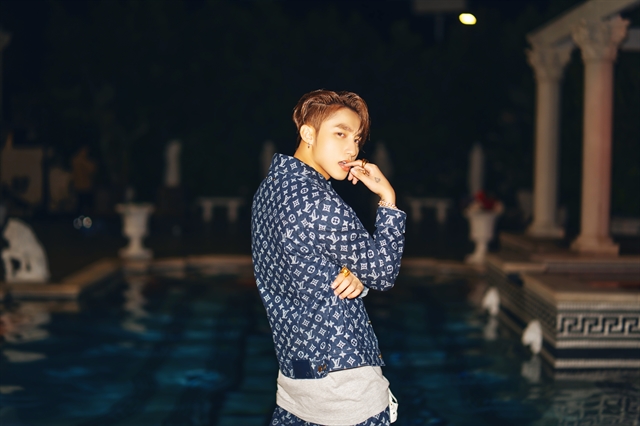 Sơn Tùng M-TP, the first Vietnamese artist to collaborate with American rapper Snoop Dogg and the first to have six music videos with over 100 million views on YouTube, will perform at the New Year countdown party on Nguyễn Huệ Street in HCM City. — Photo Courtesy of Amberstone Media

This year’s event will be staged with unique technology, promising to bring many surprises to people on the streets as well as those watching at home on TV. The event will be broadcast live on HTV3 DreamsTV.

In its third consecutive year, the event, whose theme is “Our People – Our Future – Our Home, Lights 2020”, is expected to be the year’s most spectacular party to welcome the new decade. Top artists will give many special performances, marking important milestones in the development of Vietnamese music and the entertainment industry.

The event will be hosted by well-known MC Trấn Thành. Along with its official music partner BillBoard Vietnam, Đào Minh Vũ, the director of the event, hopes to bring a breath of fresh air into the arts landscape.

This year’s line-up of artists features Việt Nam’s top talents who are breaking the limits of creativity and geography to step out of Việt Nam and bring their music to the world: Sơn Tùng M-TP, the first Vietnamese artist to collaborate with American rapper Snoop Dogg and the first to have six music videos with over 100 million views on YouTube; Vũ Cát Tường, the first Vietnamese artist to appear at Asia Song Festival for two consecutive years; and Ngọt Band – Indie Pop 9X, artists with a unique musical identity who have touched the hearts of millions.

In addition to top indie, pop, rap and hip hop artists, Lights 2020 is an opportunity for artists from other fields to share their work through international projects in 2019.

Lights 2020 promises to deliver a night of breathtaking music, dance and modern technology combined with visual effects that have never been seen before on a Vietnamese stage.

Thanh Bùi, the founder of Amberstone Media, an organiser, said: “Every countdown event has a positive message to the community. I believe that every big change always starts from each individual whose each small action is an important contribution to a greater result. The resonance between arts and technology in this show not only supports the artists to perform at the highest level, but also shows that the arts is developing significantly in Việt Nam.

“Young people are now consciously choosing a ‘greener’ lifestyle, protecting our environment for a healthier and more sustainable planet. Lights 2020 is an opportunity for the whole community to look back on the positive changes in the year, continue to unite in contributing and preserving Việt Nam for the future.”

With more than 65,000 people attending the event on Nguyễn Huệ Walking Street last year, Lights 2019 was one of Việt Nam’s biggest events. — VNS

Countdown party to open in HCM City have 711 words, post on vietnamnews.vn at December 30, 2019. This is cached page on Game Breaking News. If you want remove this page, please contact us.