Hands-on with Nintendo Switch: Jack of all trades, master of some

When I first tried the Nintendo Switch nearly three years ago now , I summed up the experience by saying that "Nintendo has made a great portable console that just happens to connect to your TV rather than a great TV console that happens to be portable." This week's launch of the Switch Lite really underscores that claim, refining some of the design compromises that were necessary to allow to allow the Switch to… well, switch between TV and portable modes. Thirty years after the launch of the original Game Boy, Nintendo has created what is easily its most compelling portable console yet. 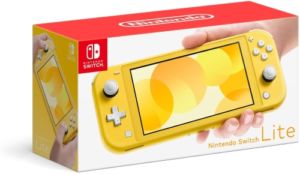 (Ars Technica may earn compensation for sales from links on this post through affiliate programs .)

Some of the most striking differences about the Switch Lite are apparent before you even open the box. The packaging is so small that a standard Switch would have trouble fitting inside, and the massive dock that accompanies the standard system would stand no chance. Inside the box, there's a Switch Lite, a USB-C wall outlet charger, and a small FCC safety pamphlet. That's it.

On paper, the differences between the Switch Lite and the original model seem pretty modest. It's 0.4in (10mm) shorter from top to bottom (a 10% reduction), 1.2" (30mm) narrower side to side (13% reduction) and about 0.27lb (115g) lighter (about 30% reduction). In the hand, though, the difference in bulk is immediately noticeable. This is a system designed, from top to bottom, to be comfortable to hold for long periods of time. The reduced size also helps the unit fit better in a bag or back pocket (though the analog sticks still poke out annoyingly in the latter case).

The slight tackiness of the Lite's matte finish also makes for a better handheld grip than the smooth plastic finish of the original. And the Switch Lite gains a subtler comfort advantage over the original by being housed in one continuous casing. Getting rid of those removable Joy-Cons—and the fiddly snap-on connection tying them to the main system housing—just makes the Switch Lite feel more solid in the hands.

Portability aside, the biggest improvement on the Switch Lite is the introduction of a traditional d-pad on the left side of the controls. The familiar cross-shaped, digital, directional inputs are the tiniest bit smaller than the ones you might remember from an NES or SNES pad. Regardless, it's still a head-and-shoulders improvement over the round, disjointed directional buttons on the original Switch Joy-Con. The change causes an instant improvement in any game that requires quick digital precision, from 2D platformers to fighting games to reflex-based puzzle titles.

Nintendo claims three to seven hours of battery life for the Switch lite. In our tests so far, we've hit the three-hour mark almost exactly while using the system at maximum screen brightness, with pretty hefty use of the Wi-Fi.

For me, using these "lower row" controls required either crooking my thumbs a bit more tightly than usual, or flaring my hands outward a bit, meaning the bottom corner of the system no longer rested comfortably in the crook of my palm. It's by no means a huge adjustment—and the Lite's reduced weight means it's not an uncomfortable one, even for extended periods. But it is noticeable.

Unlike certain Nintendo portable redesigns , the Switch Lite still has a headphone jack. But it still doesn't have native support for Bluetooth headphones. There are a number of third-party accessories that can fix this issue, but the fact that you have to buy one is a petty annoyance in this day and age.

Losing 0.7in of diagonal screen real estate for the Switch Lite ends up not being a huge sacrifice. In-game characters and text are still easily readable when holding the system a comfortable foot or two from your face. And the screen maintains the same 1280×720 HD resolution as the original Switch, meaning those screen elements end up the tiniest bit sharper in terms of real-world pixels-per-inch. Having such a large, high-definition screen in an extremely thin-and-light portable package is still a wonder after so many years of the low-res DS/3DS line (and having access to quality buttons and joysticks is still a wonder after so many years of mobile phone gaming).

Comparing portable performance, we couldn't see a difference in frame rates or graphical fidelity between games running on the original Switch and the Switch Lite. Some titles still run at a slightly reduced resolution when compared to a Switch docked to a TV, but it's the kind of difference that's practically unnoticeable on the small screen.

The real feature that makes the Switch Lite such a compelling portable package goes beyond the technical and into the games themselves. It starts with the base of Nintendo exclusives like Super Mario Odyssey , Zelda: Breath of the Wild , Mario Kart 8 Deluxe , and Super Smash Bros. Ultimate , each arguably a system seller on its own.

Hands-on: The Switch Lite is a smaller, more comfortable handheld

Then there's a veritable smorgasbord of titles from gaming's recent and distant past. That includes: passable ports of recent hits like Doom (2016) , Dark Souls , and Diablo III; recent indie hits like Celeste and Into the Breach ; excellent HD remasters of mid-range retro classics like Katamari Damacy and Lumines ; and a slowly growing selection of NES and SNES games available for an incredibly cheap annual subscription. And that just scratches the surface of what's developed over the last few years into the best collection of portable games ever assembled on a single console.

If you're considering buying a Switch Lite as a secondary portable to go with your original Switch, note that there are some restrictions when it comes to sharing your digital library across systems. Whichever Switch is dubbed the "secondary" system will have to check in with Nintendo's servers via Wi-Fi every time it starts a game, which could cause problems while traveling. And only one system can access the same digital library at a time, meaning one system will have its gameplay halted as soon as the other starts playing any downloaded game.

Going fully portable with the Switch Lite does require some compromises. The speakers are a little tinnier than those on the original Switch, and at full volume, the back panel of the machine can start vibrating noticeably. The rear of the Switch Lite also gets slightly warm to the touch after extended use, though the sides where you rest your hands remain cool.

Choosing the Lite means going without the Switch Joy-Con's controller vibrations, though we went multiple pre-Switch decades without missing those features on portable consoles. The Lite also loses the original Switch's (flimsy) built-in kickstand, meaning you'll have to buy your own replacement stand if you want to play with friends on a tabletop (you'll also need to buy your own Joy-Cons for that eventuality).

All told, these are not major compromises for a system that clocks in at a full $100 less than the original Switch.. The real question is whether you'll be able to do without the one feature that gave the Switch its name: the ability to connect it to a screen.

Back in an October 2017 investor presentation , Nintendo shared data showing roughly 30 percent of the Switch audience plays “primarily” in handheld/tabletop mode (compared to just under 20 percent that play primarily docked). If you're in that 30 percent (or feel you might be), the Switch Lite is a no-brainer must-buy system. If you simply must play your Switch games on the big screen at least part of the time, the Switch Lite can still serve as a cheaper, more comfortable secondary console for playing on the go.

Verdict: The Switch Lite is by far the best portable system Nintendo has ever made. Buy it unless you can't imagine losing the ability to play on your TV (in which case, still buy the original Switch).

Nintendo Switch Lite is the best portable system Nintendo has ever made have 1716 words, post on arstechnica.com at September 19, 2019. This is cached page on Game Breaking News. If you want remove this page, please contact us.